I’m extremely proud to launch ‘Unlock the future’, a project that I’ve been working on for quite some time now..

We print heroines on bags!

The first set of tote bags in the heroine series features 6 amazing British suffragettes, activists and political leaders..  Admirable, strong and visionary women who fought for many things we now take for granted. Let’s honour them by acknowledging their achievements and remembering what they fought for so their struggles will not have been in vain!

· Sylvia Pankhurst (1882-1960), British women’s rights activist/suffragette, artist and campaigner who was a key figure in the work of the Women’s Social and Political Union (WSPU).

· Dame Millicent Fawcett (1847-1929), English feminist, intellectual, writer and a political and union leader who concentrated much of her energy on improving women’s opportunities for higher education.

· Minnie Lansbury (1889-1922), leading suffragette and elected alderman on the first Labour-led council in east London in 1919, before women received Parliamentary suffrage (the right to vote).

· Ellen Wilkinson (1891-1947), a key radical figure in British socialism and feminism of the early and mid-20th century, who contributed to women’s suffrage (the right for women to vote).

Have a look at the site and follow the link to the ebay shop to see what the bags look like or – better – buy one. The bags are £10 each and one bag FREE if you buy the whole set of 6 bags!

Putting the HER back in HERoine.. 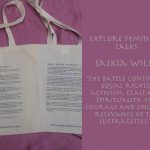 The battle continues; equal rights, activism, class and spirituality. The courage and ongoing relevance of the suffragettes.Blog